Check out some photos from our creative experiential campaigns here.

Here are our favourite examples of truly immersive and creative experiential marketing campaigns.

This one is cool. Lifestyle publication Refinery29 has hosted an annual event called 29 rooms for the last few years. The media brand curates a house of fun and art, filled with 29 rooms, all themed differently in collaboration with brand partners.

A warehouse in Brooklyn is turned into a temporary art exhibit, with rooms designed by artists and sponsored by different brands. Juicy Couture, for example, sponsored a giant snow globe you could step into.

The event started in 2015, on the ten year anniversary of Refinery29, and quickly evolved into a cultural phenomenon that even went on tour to various cities in the U.S., and Canada.

Check out the full installation below, which took place during the 2017 New York Fashion Week:

It’s difficult to find a group of skateboard enthusiasts that don’t own a pair of Vans classics. The quintessential skateboard shoe, launched in 1966 solidified the brand’s association with a pop culture phenomenon that has long since become tradition.

To engage with its core fans, Vans held pop-ups in various cities around the U.S., including New York, Chicago, and Los Angeles. The pop-ups, which have since become permanent in these cities, include a custom indoor skatepark, workshops, games, and a concert venue.

The brand, which is a staple of skateboard culture worldwide, used these pop-ups to bring together local skateboarding communities and draw in parents, friends, and new skateboarders alike.

In 2019, Vans brought their pop-up to Vancouver.

A multi-day event was planned, with concerts, skate shows, workshops, and more, all which was open to the public free of charge.

Check out the promo video below!

The famous beer brand Budweiser, set up a pop-up event at the SXSW 2016 music festival.

In order to draw beer fans to the event, a giant tent was set up in the Budweiser colours. Attendees were given virtual reality headsets that simulated a tour of the Budweiser St. Louis brewery, complete with sensory effects (cold air when a person walked “into” the freezer).

Virtual reality (VR) journeys are more common than ever in experiential marketing.

Apart from the virtual tour, the tent was fitted with beer dispensing machines, and various rooms where patrons could enjoy Budweiser products.

Check out the video below:

Check out all of our event staff and promo rep engagements.

Calum McGuigan and a Decade of Fervent EventsUncategorized 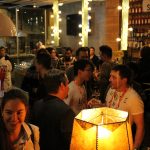